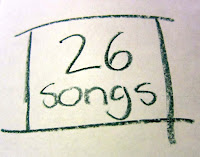 Tomorrow is me and the missus' 10th anniversary. Tin is the appropriate gift, traditionally. I do not know what that says about this song, but at any rate it is a short and sweet celebration of our ten years of marriage. I could not imagine my life without her.

This idea came from, of all places, the strings of a ukelele. I personally could not stand the uke fad that swept indie music a few years ago and swore I would never get one. But they are a perfect size for a toddler to play on, and when I came across an old Harmony at a tag sale for $35, I could not pass it up. Smart move. Turns out it is a baritone ukelele, made in the USA, 1950's, all mahogany. Once I put new strings on it, the sound was really appealing. Plus, being a baritone, the chords are the same as guitar, so I was off and running immediately. So much for the toddler's toy, she will have to make due with the shitty made in Korea mandolin gathering dust in the corner.

But I digress. This song arose from a couple of plucked chords on that little uke. Initially, the 'fi diddle do, la da day' stuff was filler, but strangely enough it morphed into the anchor point of the song, moving it forward and tying it all together. The subject of the lyrics is a snapshot of our life, and a reflection on how quickly it goes by, but how we manage to gain a little wisdom along the way.

Two things about this song structurally: under three minutes, and no chorus. Both of these attributes are such a rarity for me that to see them pop up in the same song is very bizarre. But I feel like everything I wanted to say was captured just right. Adding anything else would have lessened it.

There’s a little song that I used to know


I don’t know much but I do know this


Your pretty smile and eyes so blue


It was freezing cold but we kissed for hours


The days flew by and the years sped past


It’s been ten years since we were wed


With golden flowers above our heads a la da dee day


Now we got two babies underfeet


So let me take this chance to say

There’s a silver lining to getting gray


How the years just melt away a la da dee la da do la da day
Posted by Richard Popovic at 11:40 PM